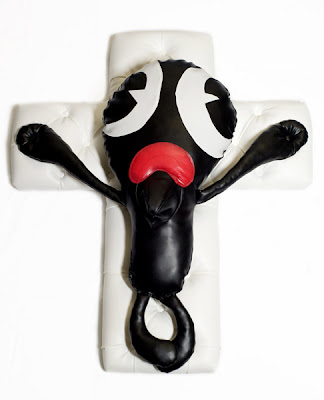 MADRE and Napoli COMICON present Urban Superstar Show Festival, first edition of the first Festival that a Contemporary Art Museum dedicates in Europe to Underground Art, Pop Surrealism, Lowbrow Art and Urban Art, which are to say the new artistic currents which better represent the contemporaneity.

Italian artist David Vecchiato has mustered lots and lots of fellows from all over the world into Naples MADRE for 4 collective exhibitions for the year 2010 and will keep on gathering, in his capacity as curator, leading figures of an art movement which is destined to become the new Contemporary Art avant-garde.

Vecchiato’s aim is to propose a critical order among different artistic trends.

The exhibition opening the Festival, on May, the 1st, 2010, is Back from Black. From bright Pop to dark Underground. And back.

Seven other exhibitions will be following through 2010 and 2011 editions:

Masters of the Underground Art

which will take up the whole area of the MADRE Museum dedicated to the Festival till the end of 2011.

Such kind of signs were in vogue from the ’60‘s till the ’80‘s but after that, as soon as the wannabe Pop and Street Art heirs, evoked through the works of the new artists generations, were getting closer and closer to the world of cartoons, comics, tattoos and those ways of expression which are mostly considered subcultures, the official world of Art blamed them for trivialization and in fact censored them by not showing their works any longer.

Thus those artists, sons and daughters of pop culture and diy logics, have grown inside underground circuits and have made best use of both web and street in order to build outstanding commercial success, finding parallel ways to the institutional Art market system and to those galleries which used to shrug them off.

That is how a subversive visual culture was born and has spread itself as a virus.

Not a vain rebellion towards the world of Art, but a parallel vision of art making, based on guerrilla promotion and marketing tactics, which pass through conceiving ideas for illustrations, cartoons, t-shirts, art toys, different kinds of objects, clothes and fashion accessories.

Often on the initiative of these artists, specialized magazines and galleries have grown up. But also firms producing gadgets of this Art that both young and old people love, and that seems to have no needs of critics to be perceived.

The initial lack of a constructive dialog with critics and official market let artists grow expressing in complete freedom. Lots of them gained visibility by painting walls and using street as gallery.

In these last few years this underground movement has started to revenge its role in Contemporary Art, and such Art system that used to shrugg it off, from galleries to museums, from Biennials to great fairs, has started to court such names, so popular nowadays, opening its salons doors to them.

In Italy, after some specialized galleries experiences, the collective exhibition Urban Superstar Show 2009, curated by David Vecchiato, presented last year in the Southern Italy most important Museum, was the first proper signal towards this changement, letting this new Contemporary Art exhibit itself in a museum. Other similar exhibitions presented in other museums and other Italian institutional places soon followed that event.

Urban Superstar Festival 2010, by having the same name, wants to carry on with the work of cultural diffusion started with the collective Urban Superstar Show 2009, offering a much richer panoramical view over this contemporary artists wave and sorting out the different artistic currents which by the way profusely draw from the same inspirational well, Pop Art above all, by introducing everyday elements which want to be universally recognizable and understandable.

In the artists and works selection, David Vecchiato highlights how many of the last decades comics authors have stylistically influenced Pop Surrealist and Lowbrow artists by gathering them together into the Back to Black exhibition.

The ascendancy of underground comic fathers such as Robert Crumb and Gilbert Shelton over Lowbrow and Pop Surrealist painters is clearly underlined throughout the exhibition, as far as that of their inspirers Basil Wolverton, Harvey Kurtzman and the authors of the American satire magazine MAD.

Earlier in timeline we then have Fleischer’s Studios cartoon style (Betty Boop, Popeye), which suggested an aesthetics among pop iconography, scary themes and surreal scenarios that we find in several works of these artists.

But actually the exhibition doesn’t neglet neither the influence of more recent comic artists such as Jamie Hewlett, Tank Girl’s and Gorillaz’ dad, Daniel Clowes, Italians like Andrea Pazienza and Bad Trip, nor authors like Dave Cooper and Jim Woodring, who then ended up in painting as well.

The aim of the whole Festival is also that of setting these artistic currents free from aesthetic generalization.

Urban Superstar Show Festival wants to clarify the origins and the stylistic divisions, thus the currents of this Underground or Lowbrow Art, or this “low profile” Art that, as it’s analysed in Vecchiato’s writing, is actually the only one able to tell with extreme clearness about the juxtapposition between fiction and reality in which Western Countries are lately living.

A series of references that goes from stylization ability of ancient eastern art to transalpine Renaissance of Bosch and Bruegel, from Warhol’s and Niki De Saint Phalle’s Pop Art to Haring’s necessary synthesis, up to Writing, lead us to a pathway among the artworks which shows where those different styles and trends of this new international Contemporary Art come from.

First exhibition concept is to give a panoramical view over these artistic currents. The following exhibitions then bring into focus each single direction, in order to let people widely understand and have a critical idea of this new Contemporary Art.

Considering that this artists wave owe much to the web, and that is through the web that it has been contaminated and could grow fast without territorial boundaries, it’ll be by means of the blog-in-progress of the Urban Superstar Show Festival artists, www.urbansuperstar.com

From 12 AM in Castel S.Elmo, at the XL room, next to the auditorium, the performance Urban Superstar VS COMICON will take place.

Urban Superstar Show guest artists will face Napoli COMICON Festival guest artists in a fight to the last brush on a panel more than 20 metres long.

The performance will keep on till Sunday, May, the 2nd.

In the afternoon the Urban Superstar Video Show mini-review will be projected at the CartooNa room in Castel S. Elmo.

> Back from Black vernissage at MADRE saturday, may, the 1st from 9 PM to 2 AM.

Artists live performances, among them:

and live set by the artists Jon Burgerman (UK) e Jim Avignon, who will present their music project Anxieteam.

During the opening night several artists involved in the Urban Superstar Show will be live performing at the Museum in order to present their side music projects, among them Massimo Giacon, Marco About and Diavù.

Pubblicato da UrbanSuperstar.com a 8:10 AM